So, last week I had to be in south Georgia any way and I decided to dip down to Tallahassee to shoot the State Capitol & Governor’s Mansion (see the State Caps page).

I was surprised to NOT find a Confederate memorial on the grounds, but owing perhaps to Floridas desire to draw as many tourists as possible, there are no memorials – only a few statues of porpoises. (See here)

As I noted in my recent Civil Rights trip, tactics that took place in one location were repeated elsewhere. But in Tallahassee protestors staged a sit in at a lunch counter and then used the Jail, No Bail tactic. 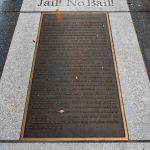 This is noted in the sidewalk across the street in front of a Civil Rights office/museum.

This protest takes place a day after Rock Hill’s and it is unclear as to which one took on the Jail, No Bail tactic first. I’m not sure that great minds think alike, but they certainly all recognize a good idea when they see one.

No need to quibble over who did what first.