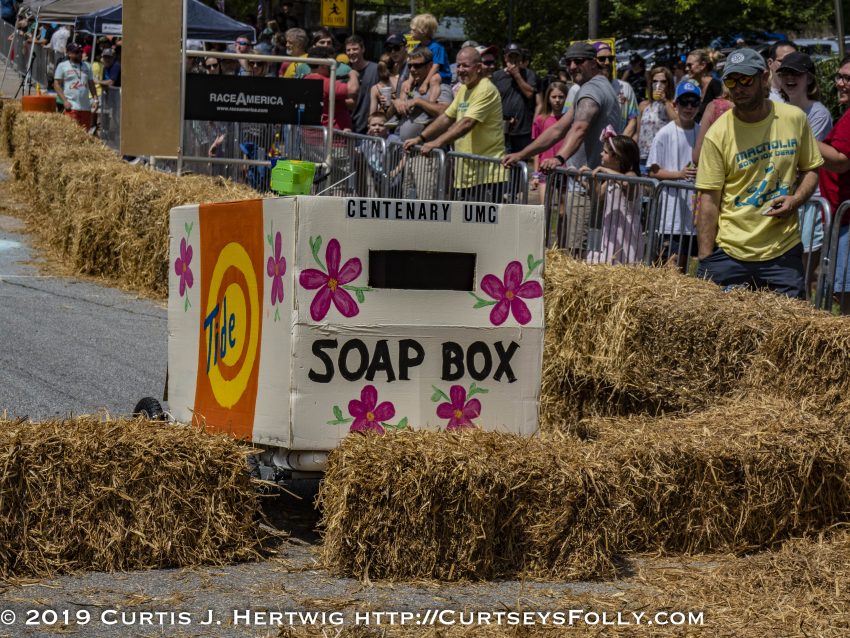 We interrupt this scintillating, epic saga of world travels to bring you back home to Macon, GA.

Perhaps one of my favorite events here in the Spring, bigger than even the International Cherry Blossom Festival, is the Magnolia Soap Box Derby. There are thrills, chills and crashes, but no one really gets hurt and damage is limited to some hay bales falling apart.

From a photography point of view, the flying hay makes a great visual & the time of year means that it’s not yet too hot. It takes up a few blocks of an intown neighborhood and there are food trucks and *even* (gasp!) adult beverages.

I arrived today as the adult teams, with professional and shade-tree classes, were doing their practice runs. (As an aside, the practice runs may be the best because the cars are not yet tested on Magnolia St’s 22% incline. Even though drivers may try to hold back, sometimes the wheels come off. Uhm… spoiler alert!)

These guys from Grave Shifters 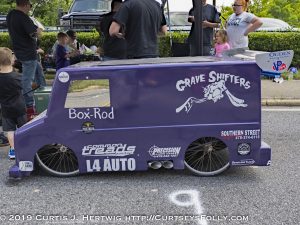 produced a very cool car,  but like much of the competition they place a very low priority on brakes. But, really, that’s all part of the fun!

The result being that we ask the question, is this an imitation of a hot rod van or just a box for moving hay bales? 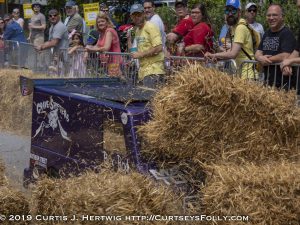 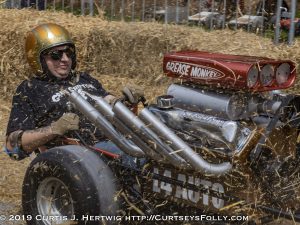 This driver certainly showed cool composure even though he had no brakes. His engine was purely ballast since it came up under sudden deceleration!!! 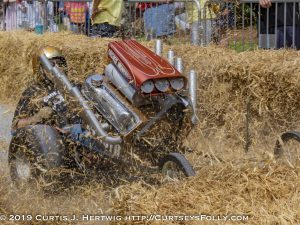 Still, the fat tires & mock suped up engine block are the dream of men who came of age during the muscle car era, but prefer large MPGs over large MPHs. 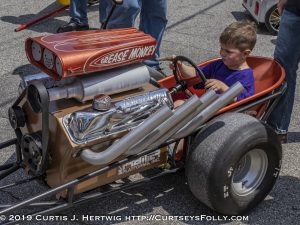 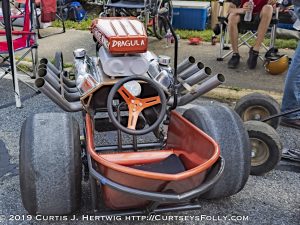 Likewise, Freeman Cabinets made an excellent cabinet, the put it on four wheels. Like so many before them, they paid scant attention to their brakes, but the cabinets held up well in the collisions with the hay bales. I might suggest that you have them redo your kitchen and bathroom, but not your car. 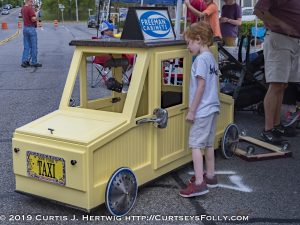 Apparently, they get the red-head’s seal of awe!!!

And we wouldn’t be Georgia if at least one driver didn’t say, “Here, hold my beer!!!” 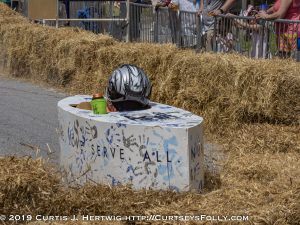 Though this one had to carry, but almost lost, his own.

Also, someone has to ride on a toilet with wheels so large they just went over the hay bales!!! 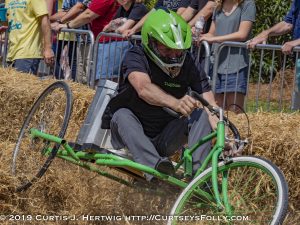 And we’re still trying to outrun the Revenooers!!! 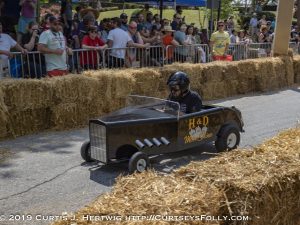 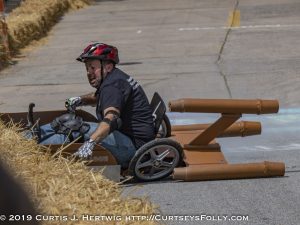 Rest assured that even though the Leadership Macon Alumni wiped out on the practice run they totally flipped their car for the race!!! (Chris Floore did walk away though.) 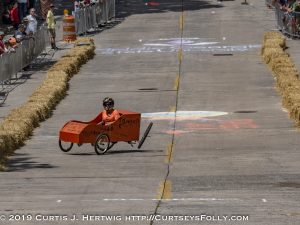 Sadly, a family entry did not make it beyond the practice run. But when I was editing the pictures I got to see the children’s writing on the side. Too cute!!!

Again, no one was hurt. The kids might have been disappointed, but nothing they won’t experience many more times in their lives. Better luck next year!!! 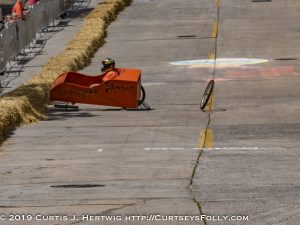 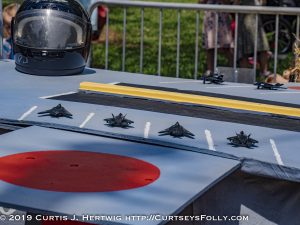 And, finally, Historic Macon’s car didn’t win any speed contests (they did wipe out even going over the hay bales & hitting the fence), but did win for extravagant and useless details.

And finally, we have a run from start to wipe out. Usually a driver starts to zig zag early on and you know the odds are, he or she is not gonna finish.